Another Year is Over

Another Year is over and what a year it was, 2011 marked a lot of events, Disasters, revolutions, and falling dictatorial regimes
My message to my self this year is to learn to accept things as they come, and stay positive when things don't go as planned. Yes, i know, life is not fair.
accept it and move one!!
Be patient, i will get what i want; i always do, if only i would be patient. And while i wait and toil for what i want, i should be happy and bloom where i am planted. I should learn to take life a little less seriously, laugh more and don't sweat the small stuff. And by the way, it IS all about the small stuff! and while I am at it, I should try to control that prodigious temper of mine a bit! I love my sarcastic sense of humor a lot but i should tone it down a bit, It's never too fulfill my dream, so i will roll my sleeves and get down to work.

I will keep praying for my Country to Obtain freedom, and while i do, i will keep in my mind all the souls we have lost along this fight for freedom, without them we will not be Victorious nor will complete anything at all, I will keep dreaming of a brighter future for my Country, and i will do what i can to help build it even from a scratch.

I will never lose my sense of adventure and fun, and keep up the zest for travelling and exploring new places. I will keep reading, keep learning new things, make new friends and pick the threads of old friendships. My simple wish for this year is to Be Happy. This is going to be an exhilarating year. A year filled with sunshine, Family, laughter, more love, good friends, good books, lots of travel and infinite possibilities. Enjoy it and celebrate each Day! 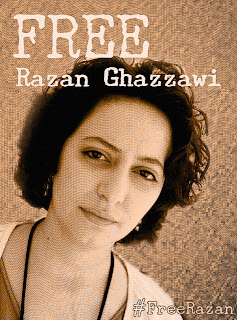 I have never met someone as Persistent
and courage as this Brave Woman, we demand the immediate release of our fellow Blogger Razan Ghazzawi http://razanghazzawi.com/
Posted by Syrianita at 3:11 AM No comments:

Our country Our pride Our Syria

Because we reached the point of no return we won't weaken we wont stop until we rise, Our Nation will rise above injustice above oppression above inhumanity and we'll walk towards the light, the light

Because we waited for so long, we endured a lot we'll build our Syria hand in hand, we'll build a civil Country with no sectarianism no racism no Ba'athism.

Because Syria is our heritage we'll keep its name High with pride, we'll keep our chin up toward the sky.

Because it is our Syria it won't relate to a name a person or a figure. Its name stands alone proud.

Because we are Syrians we won't kneel to No Tyrants no more, we'll kiss the land that beholds our blessed martyrs the Land that is blended with the patriots blood and ancestors.

Because it's Our Country our Pride our Syria 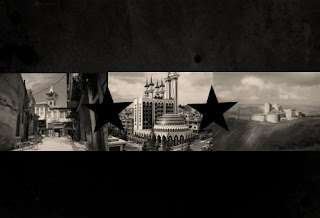 Posted by Syrianita at 12:38 AM No comments:

Email ThisBlogThis!Share to TwitterShare to FacebookShare to Pinterest
Labels: Syria

In Addition of all the Syrian bloggers ( blogging against something…) I choose to continue Abu Fares blogpost about Assholes ( I hope you wont mind abu fares) because lately assholes have been multiplied unfortunately and their numbers are still increasing without giving it a serious consideration!!
Starting with a famous saying “ if Assholes could fly this place would be an Airport”

1. There are men that tells women that they love them and cherish them, until they get them into their beds and once they get them there, the next day they stop calling, I don’t like them

3. There are men that brag about them selves and what they own just to get the other sex attention
I don’t like them

4. There are men that give lots of promises but never keep them, I don’t like them.

5. There are men that still uses aggression and beat up women I don’t like them.

6. There are men that rapes the innocence of childhood. I don’t like them

7. There are men that sells their own blood hood ( Father, mother, siblings) just for a personal benefit, I don’t like them

8. There are men who thinks that women are weak and can’t handle life by them selves, I don’t like them

9. There are men who consider if their ( sisters, daughters) are in love before marriage, is shameful and dishonorable and she should be killed, I don’t like them.

10. There are men who thinks that women shouldn’t be sexually satisfied, and they are only tools for their pleasures. I don’t like them.
Posted by Syrianita at 5:07 AM 5 comments:

Email ThisBlogThis!Share to TwitterShare to FacebookShare to Pinterest
Labels: Blogging

Those are 2 Quotes of two Noble Prize winners, that I found so deep and inspiring so loved to share them :


"All of us know a disease in Central Africa called sleeping sickness. What we need to know is that there is a similar disease that attacks the soul – and which is very dangerous, because it catches us without being noticed. When you notice the slightest sign of indifference and lack of enthusiasm for your similar, be on the alert!
The only way to take precautions against this disease is to understand that the soul suffers, and suffers a lot, when we make it live superficially. The soul likes things that are beautiful and profound”.

“At the beginning of our life and again when we get old, we need the help and affection of others. Unfortunately, between these two periods of our life, when we are strong and able to look after ourselves, we don’t appreciate the value of affection and compassion. As our own life begins and ends with the need for affection, wouldn’t it be better if we gave compassion and love to others while we are strong and capable?”

Bottom line…relationships are really difficult. and I mean here any relationship, friends coworkers, lovers…etc. Difficult In the same way that fire is necessary to put up with the disagreeable smoke which makes breathing hard, and causes tears to pour down one’s face. However, once the fire is alight, the smoke disappears and the flames light up everything around us spreading warmth, calm, and possibly making an ember pop out to burn us, but that is what makes a relationship interesting, isn’t that true?
Posted by Syrianita at 6:02 AM 3 comments:

Email ThisBlogThis!Share to TwitterShare to FacebookShare to Pinterest
Labels: Thoughts

But after all we can’t get whatever we wish for in life, otherwise it won’t be life
Posted by Syrianita at 4:18 AM 1 comment:

Syrianita
Damascus, Syria
look in thy heart and write